Fiscal Report’s of the Richmond Bureau of Police were used to show a rather frank account of the problems and achievements that the Police Department was encountering during each year. The report was an accumulation of statistics, which was drafted by the police department, generally from the Chief of Police and Department Executive Officers and subsequently the report was submitted to the Director of Public Safety.

In its report, the department was broken down into its respective division’s with statistics in the form of percentages to show each each division’s achievements and accomplishments. In addition to the statistics, a brief synopsis was also given describing the responsibilities and certain highlights of significant importance.
The k-9 Unit was a significant part of the department and mention was given through out the years as to its accomplishments and current position within the ranks.
The following are some of the excerpts given about the k9 unit through out the years.... 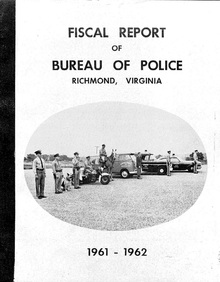 Highlights for this year did receive some noticeable changes that were taking place in the city itself and the department as well. The Patrol Division made continued progress during the fiscal year.  Four public schools were integrated and officers in civilian clothes were assigned to these schools to provide security in which no incidents were reported.   A mobile command post was placed into operation in December of 1961. The command post was to be used and deployed to areas of concern where large crowds around fires and other disasters occurred and the command officers in the command post could over see the deployment of police personnel. Notice was given to the officers assigned to the second Patrol Division (Manchester Area) in which through concentrated efforts, violence and damage was prevented at the Bowman Transportation Company terminal where employees were on strike.  The company encountered much violence and damage at the terminal in other cities as well. The use of the portable belt radio was implemented by foot patrolmen and was effective. The enabled the beat officer to have immediate awareness of conditions on their beats and were often able to handle the situation without the assistance of or before the arrival of a mobile unit.
﻿ 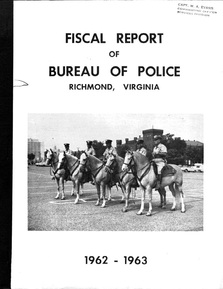 In the 1962 - 1963 fiscal report, changes in society continued to note that the need for police officers were becoming an ever increasing necessity. Civil unrest was poking its head out from behind the wall and several incidents involving blacks and white were taking place in the streets of Richmond. Sporadic picketing was conducted by black citizens looking for equal rights and receives service from certain restaurants.  During the month of May they began picketing theaters in an attempt to gain admission. On May the 18th a representative of the American Nazi Party began picketing the black pickets on a spasmodic basis. Only a few minor incidents were handled with out major out breaks of injury. In November of 1962, black officers were assigned to patrol units. This was the first assignment of this type since the appointment in 1946.

The K-9 Corps received many requests for talks and demonstrations. Whenever possible these demonstrations were given by the men and their k-9 partners. They received and created much good will for the Police Bureau and contributed much towards the public relations between the community and the police.
﻿ 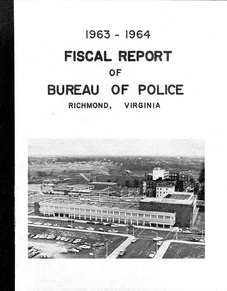 The Police Bureau finds a new home at 9th and Leigh St.  The Services Division was responsible for the preparation and move of the Bureau to the new quarters in the Safety Health and Welfare Building and after much hard work and planning the move was executed smoothly on the night of May 22, 1964. The bureau was very proud of its new facility and felt that for the first time in history they now had a building designed for their needs.   Accidents increased by over 400 over the previous year. Fatalities showed a welcome decrease from 26 during the 1962 - 63 year to 20 during 1963 - 64.

Five Police Matrons were assigned to handle female prisoners. They were issued new uniforms for the first time. The Vice Division reported that the transportation and sale of ardent spirits is a problem as well as the increased use and sale of narcotics. Seven stills were located and destroyed. One supplier of narcotics was arrested (a former bootlegger) and charged with possession of 38 grams of heroin and 520 grams of marijuana.  The K-9 Corps is still providing and creating good will between the community and the Bureau. During National Police Week, they gave a great many talks and demonstrations at schools and civic organizations. The K-9 Corps is given special duties in conjunction with other squads. A specific shift was assigned from the hours of 8:00 p.m. to 4:00 a.m. to cover peak hours of crime. The k-9 Corps in addition to the Phantom Squad and other special details was given the assignment to patrol high crime areas. The past had already shown that the efforts of the K-9 Corps and it ever visible appearance prevented crimes or apprehended criminals were other methods had failed. 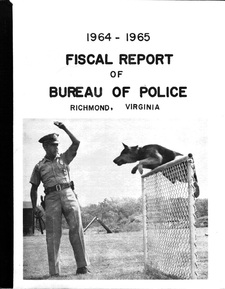 Richmond City is starting to show an increase in police activities and in crime. Major crimes increased to 16.3 per cent. During Police Week, May 9th thru the 15th, the Police Bureau held and open house at the new headquarters to share with the citizens of Richmond their pride in the new facilities. A total of approximately 3,899 visitors were taken on a tour of the police headquarters during this year. It was also during this time that the emphasis was being placed on training. The training Division graduated 54 police and 3 cadets, 55 supervisory officers and detectives attended a 15-hour seminar in “Mob and Riot Control”.

The image of the Bureau of Police was improving but there seemed to be a nation wide increase in resisting arrests. For this fiscal year alone forty-nine police officers were injured while handling prisoners. It was also during this year the K-9 Corp was moving to its present location.

In mid April of 1965, the K-9 Corps was given the use of the old City Jail Farm, which is located just behind the John Marshall High School grounds.  This property had one building on it that would be used for the office space.  Under the direction of Sergeant H. M. Schwartz, the members of the K-9 Corps constructed their first permanent home.  This location and building are still being used to day.  The K-9 members also constructed jumps, cat walks, the “A” jump, the table jump, the culvert, the hurdles jump, ladder climb and wall jump.

Even with all the responsibilities of the move and the work schedule, the K-9 men and their partners still found time to continue their effort to provide community relations and public awareness to citizens in their communities.  Even during this fiscal year the k-9 officers were patrolling the night duty. From 8 p.m. till 4 a.m. they were covering areas of high crime activity on foot patrol.
﻿ 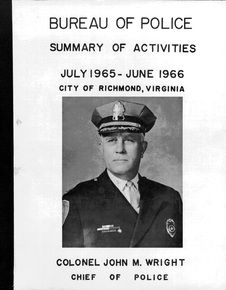 This year finds the Bureau implementing new methods of structuring the department. First and Second Districts were combined under the “Patrol Division”. In addition the Traffic Division along with the First and Second Districts were placed under the “Uniform Operations” and a major was placed in command. The Detective Division, Vice Division and Juvenile Division were combined under the “ Investigative Operations” and a Major was placed in command.  A total of 453 commendations for the bureaus members were received from citizens during the fiscal year.  Some members were commended a number of times.  Two men were awarded the Police Medal, five received the meritorious Police Duty Medal, eighteen were given the Excellent Police Duty Medal and sixty citations were given during the year. The Patrol Division policed six strikes at various business places during the fiscal year.  However, one labor dispute had been going on since July 1965 and still required police attention.  There was no trouble at any of the strike locations.  The K-9 Unit put on numerous demonstrations at schools and civic groups. 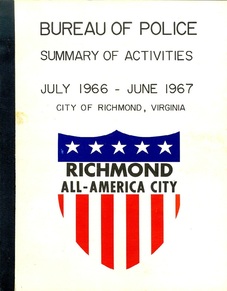 An important contribution was made to the Bureau Of Police during this year. The implementation of the Police Community Relation was established on January 30, 1967.  This program was made possible thru a Federal Grant of $14,718.00 from the office of Law Enforcement Assistance.  The program was to extend through October 30, 1967, at which time the Bureau of Police would make provisions to continue the program in the Police Budget.  During this year there were a series of burglaries of business establishment’s. After extensive investigation, a male was arrested which resulted in the clearing of 43 burglaries.  The Vice Division was not without notice in that the division conducted several investigations into Gambling, Narcotics, Prostitution, and Illegal Whiskey. Gambling arrests decreased that fiscal year, however it was reported that there was an increase in the number of narcotics and dangerous drug arrests.  In a period of approximately two months, a total of 42 individuals were arrested on moral charges.  The transportation and sale of Illegal Whiskey, once a major problem had been decreased considerably.  Many of the “Old Time” corn whiskey bootleggers were purchasing legal whiskey from various A. B. C. Stores in the city. They would then resale the legal whiskey usually in the form of shots at nip joints.

During this fiscal year 20 walkie talkie radios were purchased. These radios were assigned to Patrolman on foot patrol as well as the mounted squad, both having been without continuous communication with headquarters. They had to rely entirely on public telephone or Police Call Boxes for communications.  The radios increased the efficiency of the walking patrolman and the mounted squad by keeping them in constant awareness of the happenings on their beats as they occurred.   The K-9 Corps training was completely renovated during this year.  The obstacle course for the police dogs had been improved and more training obstacles were added.  The old dwelling situated on the property had been demolished and removed.  The City Health Department had vacated their portion of the permanent building used for offices and storage for the K-9 Corps, thereby giving the K-9 Corps the entire building and additional space that they needed so badly. 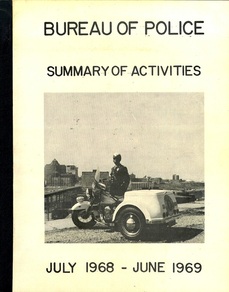 ﻿In this fiscal year we find that the K-9 Corps was being used to continue and ever ongoing effort to perform their duties in deterring crime in high crime areas.  The Patrol and Detective Division formed a highly mobile unit. The squad was called the “Tactical Squad” and was comprised of The Special Detective Squad and the K-9 Corps. Acting as a single unit they were to be used and moved rapidly into areas of troubled spots in an effort to control the crime. The special squad was lead by a Lieutenant from the detective division.


During this year the Police Bureau handled over 134,00 calls for service which was an increase of 41.3 % over the previous year. Major increases of narcotics and dangerous drug violation were on the increase by the young people in the community. Juvenile delinquency was increasing as well in the Richmond area. Increases of criminal offenses in the areas of Breaking and Entering, Automobile Thefts, Robberies and Larceny, required extra Juvenile personnel to formulate and implement special surveillance teams to combat the increasing violations.

The Patrol Division was the largest section of the Uniform Operations and remains so today. At the time of the 1968 - 69 Fiscal Report, there were 211 patrolman and 32 supervisors. They maintained 50.8 % of the personnel in the bureau. The K-9 Corps was given special recognition during this year due to there ongoing effort to provide better community relations. At this time the K-9 Corps was comprised of One Sergeant, 21 Patrolmen and 22 dogs. The K-9 Corps was as then and now, sometimes called upon to assist other police department and organizations in the search for missing persons and escaped prisoners.  ﻿