After spending countless hours at the Virginia state library and sifting through hundreds of microfilm of the local news papers, I was amazed how much publicity the k9 unit got. The officers who shared their treasure trove of information produced even more valuable news articles and photos that helped me piece the puzzle together and answer some needed questions.


Had it not been for the help of the following individuals, some of these photos and information may not be here to share with you.


They are a timeless piece's of information that helped forge the k9 unit into what we know today.  I would like to take a few moments and thank the following people for sharing their photo's, newspaper clipping and stories with me so that I can share them all with of you. 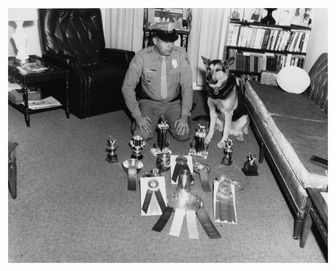 Officer Oscar Martin and K9 "Fritz" with their trophies and ribbons from the time in competition. Photo donated by Oscar Martin
Oscar A. Martin: Oscar went into the K9 Unit in July 1st, 1965 thru July 1st, 1970...there were 12 handler in the class...
Oscar and his K9, "Fritz" had won countless trophies and Ribbons for participation in numerous Police K9 Association competitions and for two years they earned best all around dog title's. 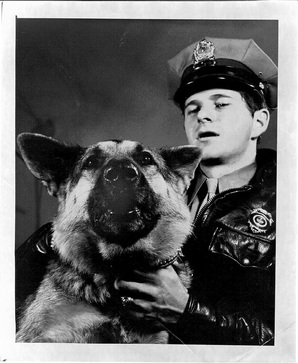 Division for a few months, then to 1st Precinct Patrol Division.  Around May of 1960, he was assigned to K-9 for training. He obtained his first canine “Rock”, from a family in Windsor Farms, and trained with the his class in Bryan Park.  (Probably the most enjoyable part of his police career.)

In October of 1961, the Air Force Reserve Unit was activated due to the Berlin Crisis.  It is at this time that his canine “Rock” was turned over to Lexie Ross. After Csaky returned from active duty he was reassigned to the Police Bureau and was transferred to the Traffic Division. Other areas of assignment were Communications Section and Identification Section. 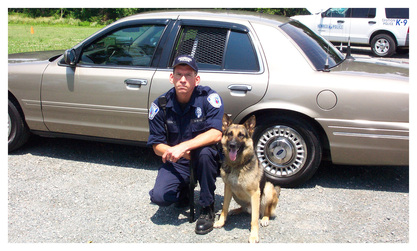 Officer Glenn Koontz (retired) and k9 "Rex"
Officer Glenn “Mart” Koontz. Glenn was hired with the Richmond Bureau on August 9, 1982. He was first assigned to the Uniform Patrol Division in Third Precinct. He was later transferred to the Canine Unit on March 4, 1985. Glenn was instrumental in the first Law Suit brought about against the City of Richmond for the compensation of wages for canine care off duty. The Law suit was filed with City Attorneys office and through arbitration the members of the canine unit won an award of back wages and made way for the additional wage compensation for the care of police canine housed at home. The compensation was for the care and maintenance of the canines while the officer was housing the canine at home and caring for it. During Officer Koontz career in canine he has been assigned six canine partners. 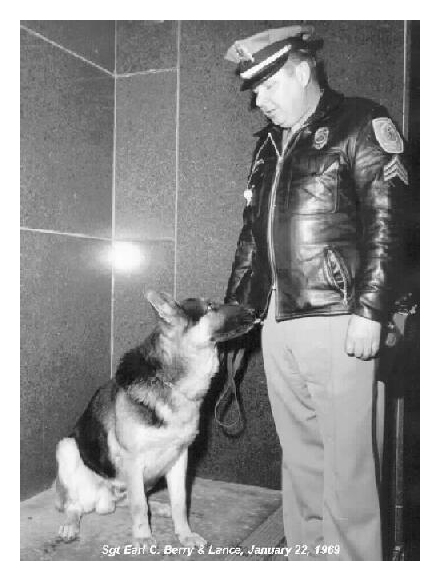 Sgt. Earl Berry and K9 "Lance" image donated by Earl Berry
Sgt. Earl Berry (Retired)(Deceased)  Earl Berry became the Sgt. of the k9 unit. While not only being a officer in charge of the unit but a dog handler as well, Sgt. Berry competed along with others within the unit at national competitions taking trophies and ribbons along the way. During their time competing in the Police K9 Association, Sgt. Berry and other members of the unit became more interested in the association which they subsequently joined. Sgt. E. Barry was nominated for the position of National President, which he won.

Sgt. Barry was re-elected for another term and by the end of his second term the organization held approximately 800 members from all over the country and as far away as Hawaii. 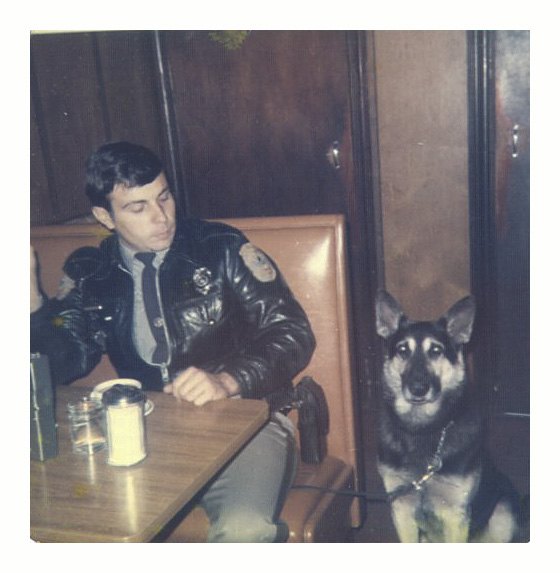 Officer Robert "Bob" Evans and K9 "Charger" Image donated by Bob Evans
Officer Bob Evans:  Thanks Bob for the great images and articles on the k9 competition's you competed in. 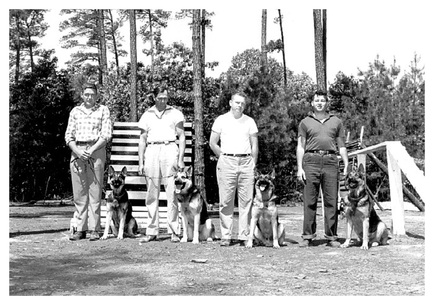 Doug Knuckols and K9"Captain"..Doug is the first person on the left in plaid shirt...this was the first school to start the Richmond Police K9 Unit......image donated by Doug Knuckols
Patrolman Doug Nuckols (Retired/Deceased)
Officer Nuckols was extremely helpful as we rode over to Bryan Park where he showed me where the first started training the new k9 dogs. He also showed me where they had to move to near Pine Camp and then eventually into the current building back in 1965. Thanks for everything Doug, I enjoyed the time we spent together....


Other sources of information;